I Tried A New Exercise! AntiGravity Yoga at Studio Anya

AntiGravity yoga. OK, I know it sounds kind of crazy, but it’s a real thing! It’s a fairly new form of yoga (created in 1990), and yes,  it is every bit as fun and impressive as its name makes it sound.

I tried it for the first time ever on Friday with The Holding Space at Studio Anya. It was one of the most playful and relaxing yoga classes I’ve ever taken and I really can’t wait until the next time I can take another class! For my first time around, I signed up for the restorative class (described as “the gentle, deep stretching, healing side of AntiGravity Yoga“) so that I could learn the ropes in an easy going, slow-paced environment. It’s important to take it slow and be gentle when learning a new kind of exercise.

You know, especially when you’re going to be hanging upside down and stuff

AntiGravity yoga classes incorporate a floating hammock (the purple thing I am hanging from in the photo above) to allow for greater spinal decompression, enhanced weight resistance, and deeper stretching. The atmosphere and feel is extremely similar to a typical yoga class, only traditional poses are modified in order to work with the hammock.

Where: Studio Anya at West 24th street between 6th Avenue and Broadway.

The studio is exquisitely clean and beautifully decorated. It’s not a traditional yoga space, but it totally works. It’s unique in that it includes a small kitchen where you can enjoy some healthy snacks and a cup of tea! In addition to their AntiGravity yoga classes, they also offer a handful of other options including AntiGravity and traditional Pilates classes.

Joy was extremely knowledgeable and helpful. The classes are small (about 6 people) and allow for a lot of individual attention and assistance.

I tried it. Did I like it?: Yes! I really enjoyed the class for the fact that it put a completely new spin on a familiar and favorite exercise. I’m always talking about how you should try new things and explore to find the exercises that you love, yet lately I’ve been so glued to my running and weight lifting routine that I haven’t strayed from the norm for quite some time. Not to mention I’ve totally been neglecting my love for yoga. Not cool!

My favorite part about the class was how playful it was. Hanging and swinging in the hammock made me feel like a kid on a swing set. Depending on what kind of studio you go to and who your instructor is sometimes you’ll be reminded, but yoga (and all exercise in general) is supposed to be fun and make you smile. Unfortunately, I think a lot of the time that aspect of it is lost, so this was a really refreshing breath of fresh exercise air.

The class began with a breathing meditation in what’s called “womb pose,” which simply requires that you sit in a cross legged position in the center of the hammock. When you do this, you’re completely elevated off of the ground and the hammock sort of engulfs you, and not in an overbearing way, just so that it’s literally like you are in a womb. It sounds a little ridiculous, and I’ll be honest, I felt a little ridiculous at the time (I was laughing internally), but honestly it is one of the coolest, most relaxing feelings ever to just float there and focus on your breathing. It actually feels like you are levitating. Like magic!

As I mentioned earlier, the restorative class was very easy-going, so if you’ve never tried AntiGravity yoga it’s a great place to start and get your body accustomed to the hammock.

Would I do it again? Absolutely! I’d definitely love to take the restorative class again, especially at the end of the week when I’m in need of some good rest and relaxation. And when I want to get a great yoga or strength workout, I can’t wait to give the traditional AntiGravity yoga and Pilates classes a try!

Calorie Burn: Unknown. I took off my heart rate monitor and watch before the beginning of class because it’s recommended that you remove all watches and jewelry so they do not snag the hammock. If I had to guesstimate, I’d say I burned about 100 calories, if that. The class is one hour and fifteen minutes long but I doubt my heart rate went above 80 or 90 beats per minute for the entire time. So, the restorative class is better for relaxing and meditating. But if you’re looking for a big calorie burn, I would imagine that the traditional AntiGravity Yoga and Pilates classes are challenging and will work up a sweat.

Would you try AntiGravity Yoga?

*Disclosure: This is not a sponsored or endorsed post. However, the kindhearted yogis of The Holding Space did offer a discount on my first class with them. I was not obligated to write about it and all thoughts and opinions above are my own. 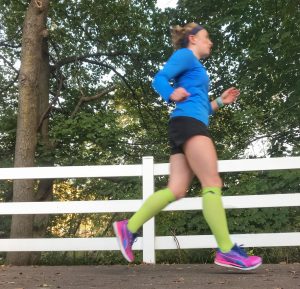 Welcome to Hungry Runner! Katie is an editor, blogger and former personal trainer who writes about food, fitness and life as a runner living in the suburbs of Philadelphia.